News
You are here: Home / News / Events / Ladies Tour of Innisfree on Saturday 24th of September 2016. 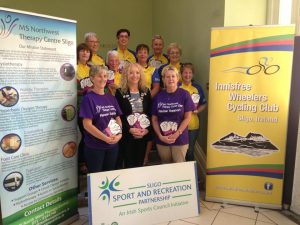 This great event takes place on Saturday 24th of September 2016. The start and finish of the event is The Sligo Park Hotel, Cornageeha, Sligo.

The event starts at 11am. It is strictly confined to female cyclists. This year Innisfree Wheelers are proud to be in partnsership with MS Therapy Centre, Sligo who will be the benificiery of all entry fees received.

The tour is designed for women that are interested in getting back on the bicycle with very little training required. The tour will be conducted at a steady pace with no cyclist being dropped behind and full assistance being provided along the route.

This year Innisfree Wheelers are delighted to be involved with Multiple Sclerosis    Therapy Centre North West as our charity partner.

The Multiple Sclerosis Therapy Centre was the “brain child” of Mr Padraic Kilcullen (RIP). Padraic himself had multiple sclerosis and was keenly aware of the need for a facility in Sligo to cater for people diagnosed with multiple sclerosis.

In 1991 the Yeats MS Support Group commenced a vigorous fundraising campaign for the much needed facility. The group also approached the North Western Health Board (HSE) and presented their ‘case’ – outlining the necessity for a service in the region for persons diagnosed with multiple sclerosis.The Health Board leased the old gate lodge on the grounds of St John’s Hospital to the group, gave them a financial commitment and seconded the first manager of the Centre from its staff.The building was refurbished with the monies raised by the voluntary group and was officially opened by President Mary Robinson in July 1993.

The services provided by the Centre went from strength to strength and in 1995, thanks to hard working and dedicated fund raising committee, the physiotherapy department was extended. In the summer of 1995 the first ever mini bus, for the transportation of clients, was purchased. This purchase was part-funded by the Programme for Peace and Reconciliation.

The project is managed by MS North West Therapy Centre Ltd.The company supports and works in co-operation with other voluntary and statutory organisations to pro  mote treatment and support facilities not just for people diagnosed with Multiple Sclerosis but also for their relatives and carers.

Want to join the discussion?
Feel free to contribute!

New Cycle Lanes to Encourage More People to Travel to Work and School in Sl...
Scroll to top